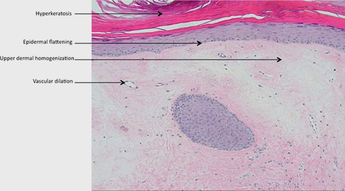 Recent studies indicate that the injection of PRP (Platelet-rich plasma) is also known as O-Shot and P- Shot  may effectively reduce symptoms and improve lesions.
Lichen Sclerosus  is a disease of unknown cause that results in white patches on the skin and scarring on and around genitals. It usually occurs in young boys and girls and 60 years old women.
Several risk factors have been proposed, including autoimmune diseases, infections and genetic predisposition.There is also evidence that LS can be associated with thyroid disease. The condition most commonly occurs on the vulva and around the anus with ivory-white elevations that may be flat and glistening. There may be marked itching or the condition may be without any symptoms. There may also be thinning and shrinkage of the genital area that may make coitus, urination, and defecation painful.

In males, the disease may take the form of whitish thickening of the foreskin,
which cannot be retracted easily (phimosis). In contrast to women, there is no
perianal involvement. In men, this genital involvement has traditionally been known as balanitis xerotica obliterans.
Only 6% of LS are isolated extragenital lesions. On the non-genital skin, the disease may manifest as porcelain-white spots with small visible plugs inside the orifices of hair follicles or sweat glands on the surface. Thinning of the skin may also occur.

Pathophysiology Although it is not clear what causes LS, several theories have been postulated.

Lichen Sclerosus is not contagious; it cannot be caught from another person.

Genetic Lichen sclerosus may have a genetic component. Higher rates of lichen sclerosus have been reported among twins and among family members.
​
Autoimmunity Autoimmunity is a process in which the body fails to recognize itself and therefore attacks its own cells and tissue. Specific antibodies have been found in LS. Furthermore, there seems to be a higher prevalence of other autoimmune diseases such as diabetes mellitus type 1, vitiligo and thyroid disease.

Infection Both bacterial as well as viral pathogens have been implicated in the etiology of LS. A disease that is similar to LS, acrodermatitis chronica atrophicans is caused by the spirochete Borrelia burgdorferi. Viral involvement of HPV and hepatitis C are also suspected.

A link with Lyme Disease is shown by the presence of Borrelia burgdorferi in LSA biopsy tissue.

Hormones Since LS in females is primarily found in women with a low estrogen state (prepubertal and postmenopausal women), hormonal influences were postulated. To date though, very little evidence has been found to support this theory.
Local skin changes. Some findings suggest that LS can be initiated through scarring or radiation, although these findings were sporadic and very uncommon.

Diagnosis The disease often goes undiagnosed for several years, as it is sometimes not recognized and misdiagnosed as an yeast infection or other problems.
A biopsy of the affected skin is often done to confirm diagnosis. When a biopsy is done, hyperkeratosis, atrophic epidermis, sclerosis of dermis and lymphocyte activity in dermis are histological findings associated with LS. The biopsies are also checked for signs of malignancy

Psychological Effect According to the National Vulvodynia Association, which also supports women with Lichen Sclerosus, vulvo-vaginal conditions can cause feelings of isolation, hopelessness, low self-image, depression and anxiety. Some women are unable to continue working or have sexual relations, and may be limited in other physical activities.

Lichen Sclerosus  is usually treated with potent topical steroids, like clobetasol propionate or mometasone furoate. If used correctly, these medications can relieve symptoms and prevent scarring.

In cases of prepubertal LS, there is some evidence that patients can undergo remission of LS. In a cohort of 12 girls who followed up for 10 years until adolescence, 25% underwent complete remission. Unfortunately, 75% remained symptomatic and demonstrated physical signs of LS into adolescence
Other treatments including topical hormonal therapies (testosterone and progesterone) have been proposed but not conclusively proven to improve symptoms.Another small study has shown long-term antibiotic treatment to be effective in patients who had poor response to steroids. Recent studies indicate a role for topical calcineurin inhibitors such as tacrolimus.
​
It's not considered beneficial to remove LS-affected skin that is not located on the genitals, as it also tends to relapse.
Many patients report  that the injection of PRP ( also known as an O-Shot and a P-Shot ) may effectively reduce symptoms and improve lesions.
There is also some reports that patients with Lichen Sclerosus may benefit from Vitamins  A, C , Omega 3 and Zinc.  Paleo diet and diet low in Oxalates, Gluten free diet are also seems to be beneficial. The combination of all above listed treatments found to be most effective and result in high chance of remission or cure.
​ 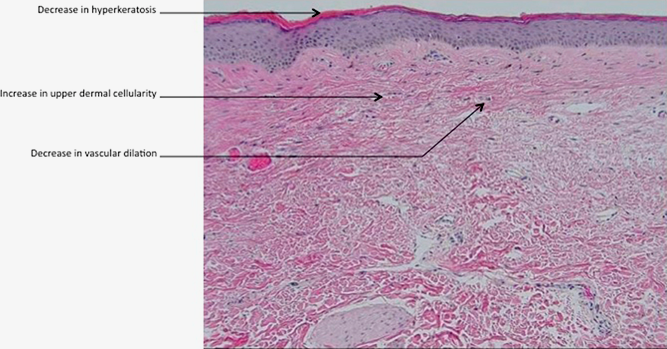 Disclaimer - We do not guarantee any specific results, the results may vary from person to person.